Eating and Cooking all the things in Melbourne
09
May

Previously on Food, Love & Tokyo (Part I), we had touched on yakitori, roast chicken, supermarket, ice cream, gyudon, soba and convenience store. I would like to dedicate this one to sushi lovers everywhere. 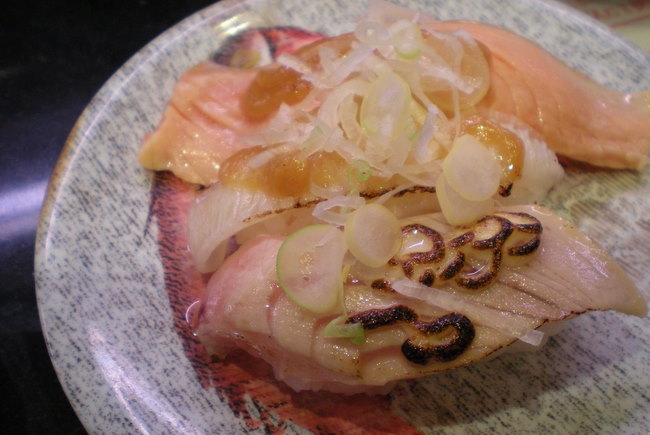 We start with Midori Sushi – a well known sushi train restaurant in Shibuya for its quality but inexpensive sushi. We were warned of a queue out front (and there was) but luckily the queue moved fairly fast especially there were just the two of us. We started off with trio of aburi sushi which were fatty pieces of fish that had been quickly seared, presumably with a blow torch. I believe they were salmon (sake), yellow-fin tuna (maguro) and halibut (engawa). 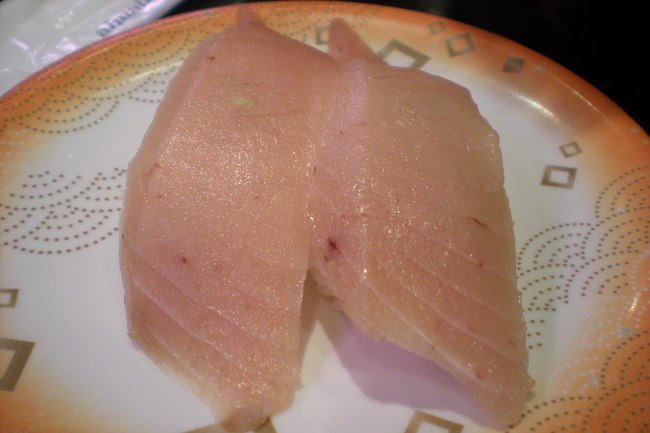 Not too sure what these were. 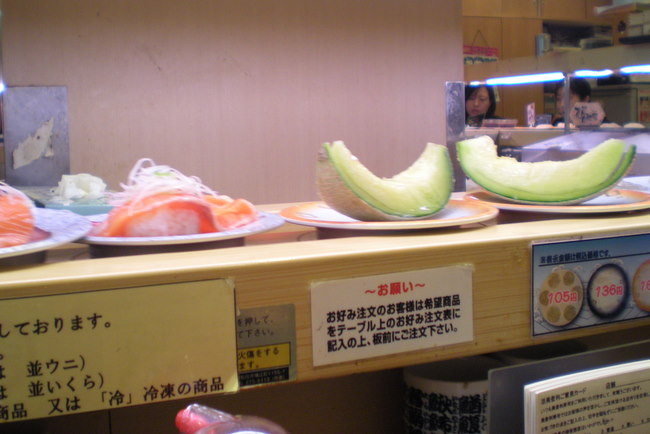 A line of salmon nigiri flying past and honeydew melons. I have never seen honeydew on a sushi train line before. 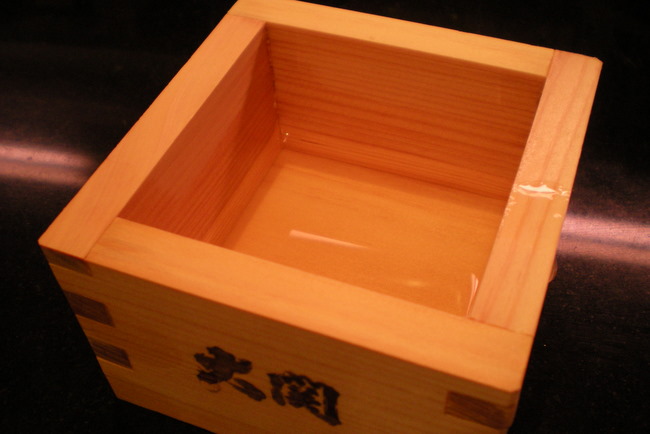 A hit of sake (Japanese rice wine) served in the traditional wooden box. It was the first time I drank sake served from a wooden box cup (masu). I have to say I’m not a fan unfortunately because all I could taste was the wood. 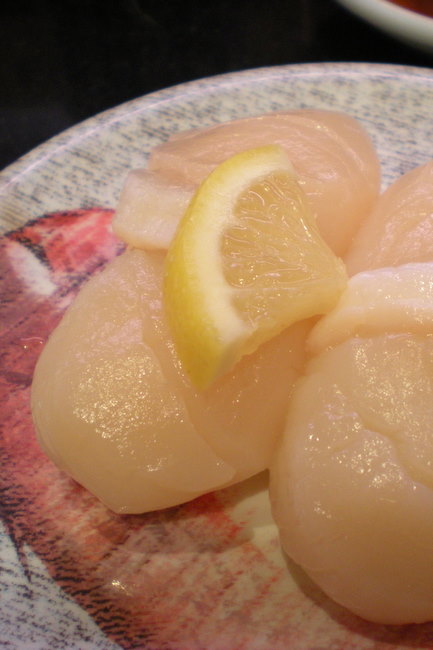 Hotate – Japanese scallops. So fresh. So luscious. So sweet. Like lollies. 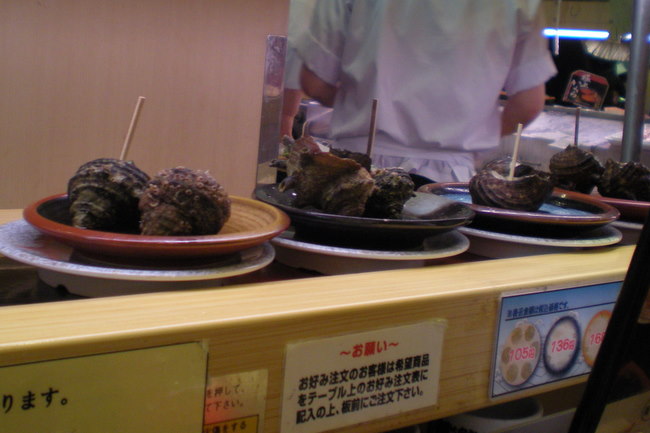 I had no idea what these were. They were some sort of rather large shellfish that I have never seen in Melbourne. We weren’t quite game to try it. Or rather Josh wasn’t game to try it and I just couldn’t eat both of them. 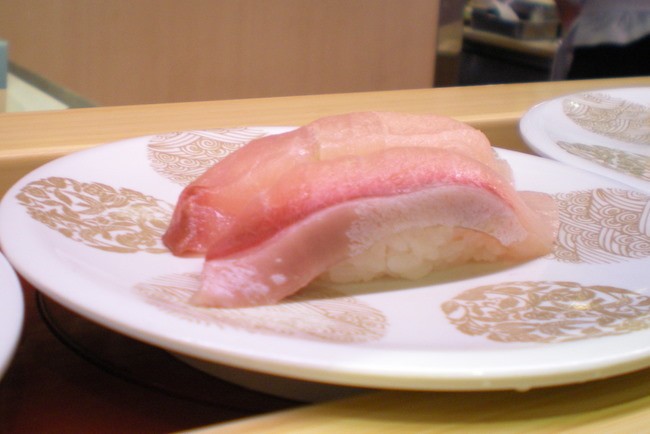 I think these were the halibut (engawa) again but I don’t remember eating them. No actually I don’t think they are. 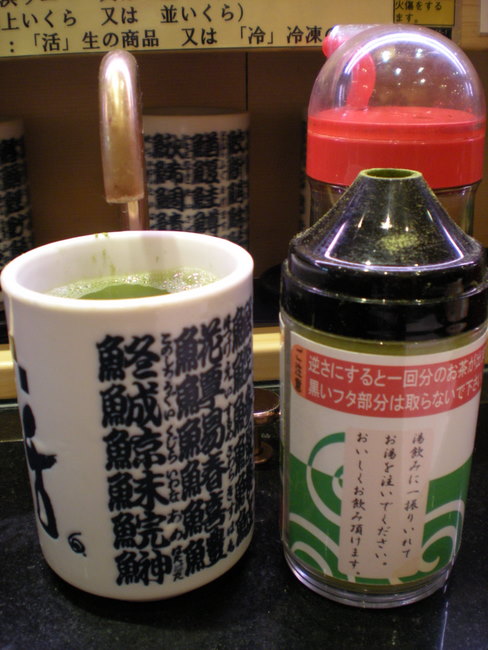 We also drank the complimentary green tea – the green tea powder and cups (along with chopsticks, soy sauce, wasabi and dishes) were placed in in front of us. It took me quite a while to figure out that you were supposed to make your own tea by mixing the green tea powder with the boiling water that came out of the tap. 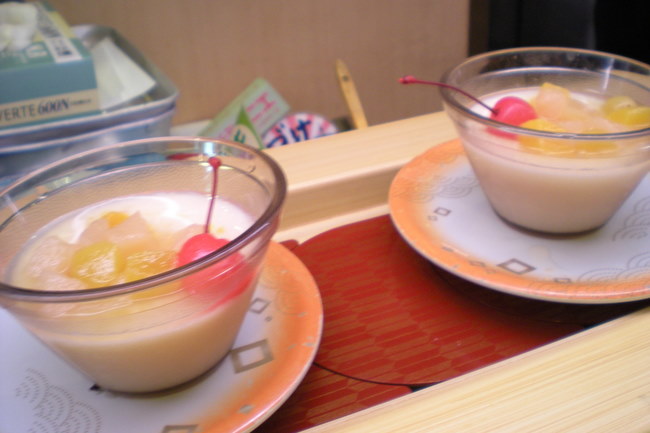 Almond pudding and fruit salad – we didn’t have it. It just looked interesting enough to take a photo of. Just not to eat. 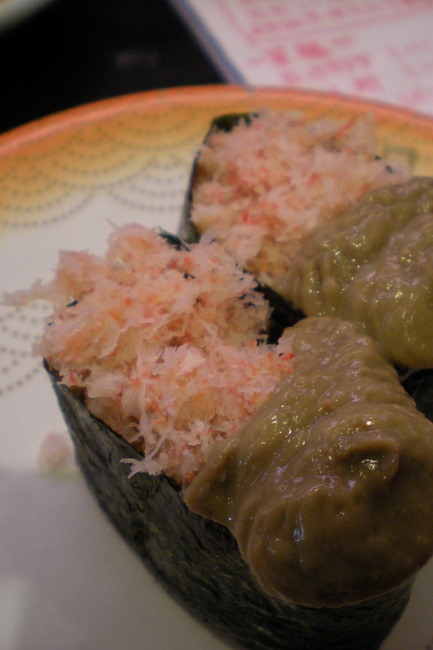 Don’t let the repulsive looking grey sludge put you off – kani miso (‘crab miso‘) is basically the most beautiful essence of crab. Often translated as crab liver or crab brain, oh who the hell cares what it is? It is absolutely delicious. So rich and creamy – absolute beautiful essence of a crab. Josh absolutely refused to touch it. So more for me. 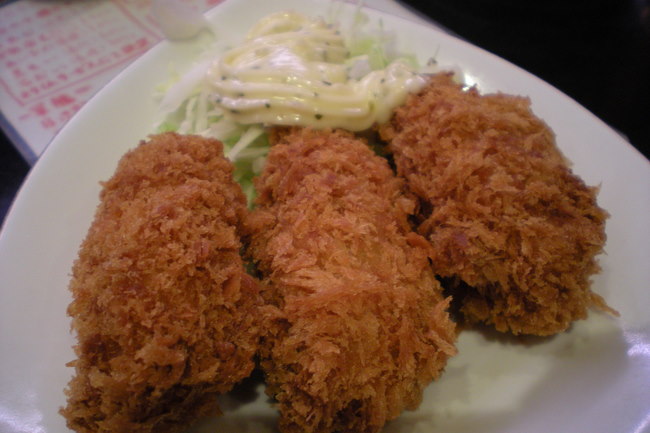 Koroke – or Japanese croquette. Something crunchy and warm to contrast with the cold, soft raw fish. 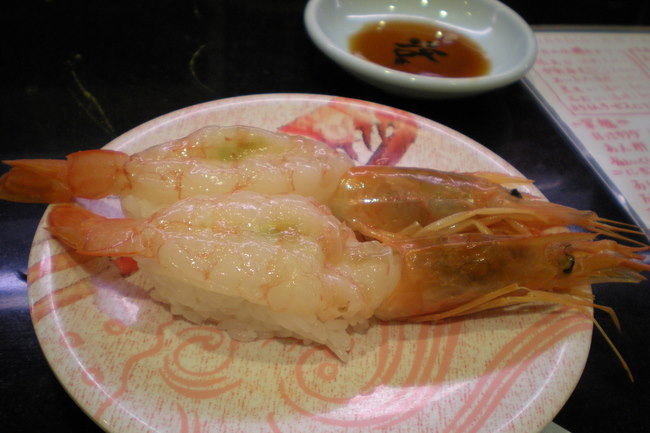 One of the stars of the show – Japanese prawns. Don’t let the red colour fool you. They were fresh and raw and just so so beautiful. I don’t think Josh touched this either. 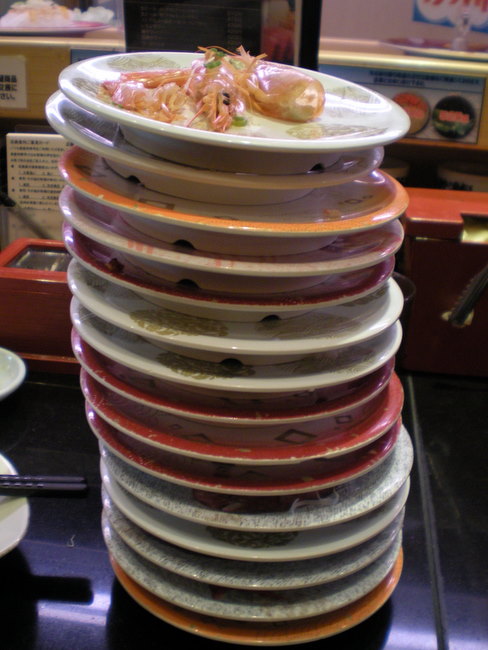 As you can see, I didn’t manage to take a picture of every single dish. Suffice to say we ate a lot! The coolest thing was when it was time to pay, they piled all the plates in a single tower and ran a scanner through them. No counting! Super cool. 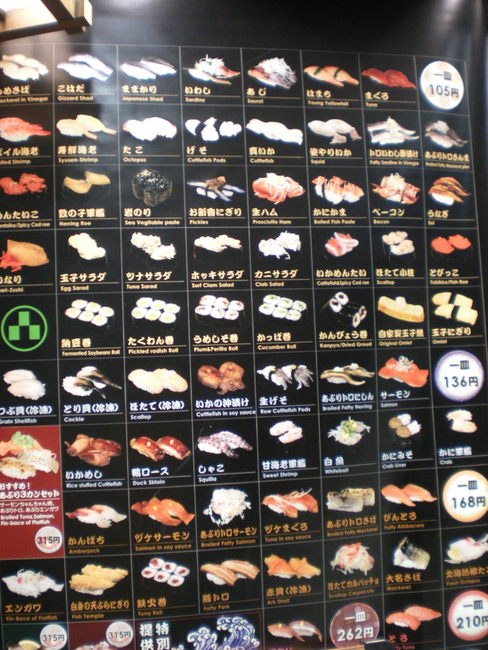 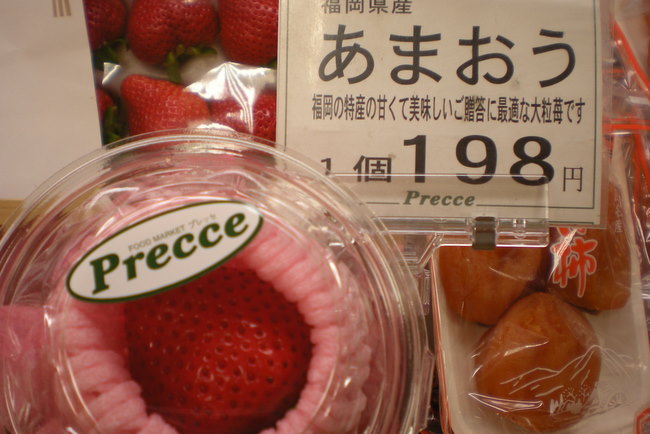 We discovered the most beautiful giant, plum-sized, strawberries – 198 yen each. Ouch. Bear in mind that Australian dollar in 2008 were not as strong as it is now. 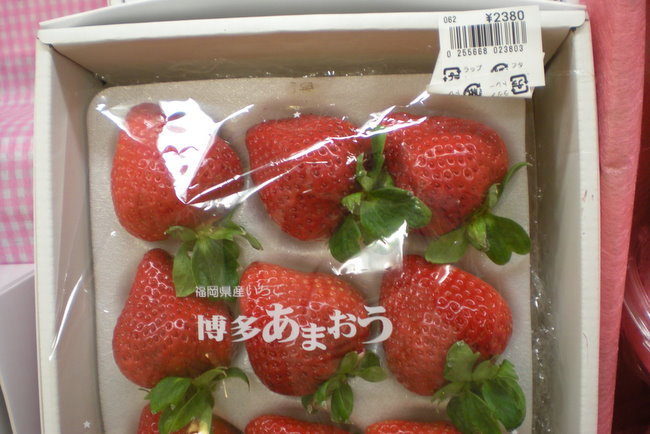 Look at how expensive they were! We did end up buying a box of slightly cheaper variety and by god they were the sweetest, juiciest, most strawbbery-ish strawberries ever. And they weren’t even the super expensive ones! 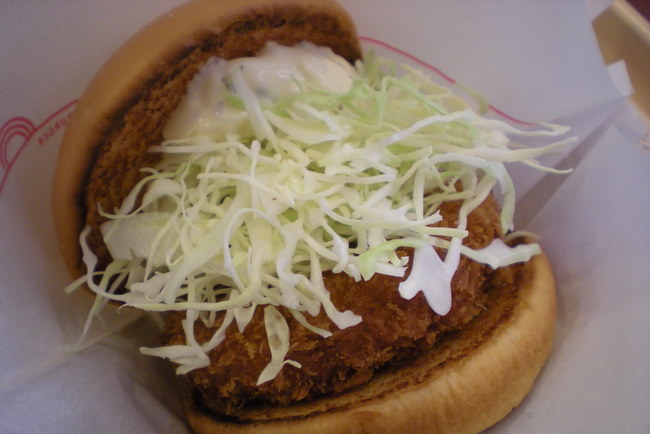 Since we’ve been through the highs – may I present the lows: prawn cutlet burger from MOS Burger. I have heard nothing but great things about this burger but it was thoroughlydisappointing. Very average indeed. 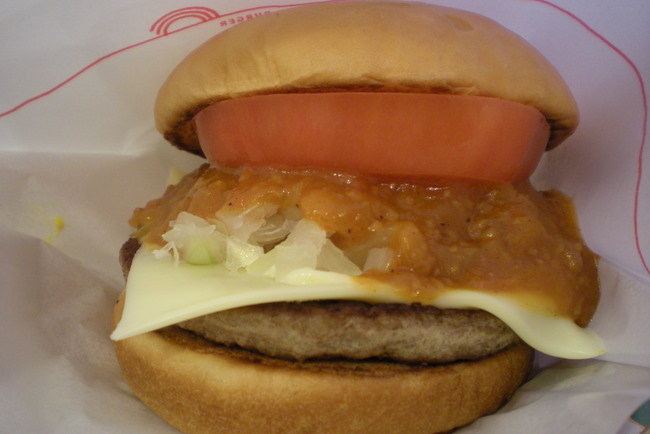 Cheeseburger with spicy sauce, again, from MOS Burger. Believe it or not, the best thing from this burger was the tomato slice. The rest were rather average as well. Ah well, you can’t have it all in Japan. 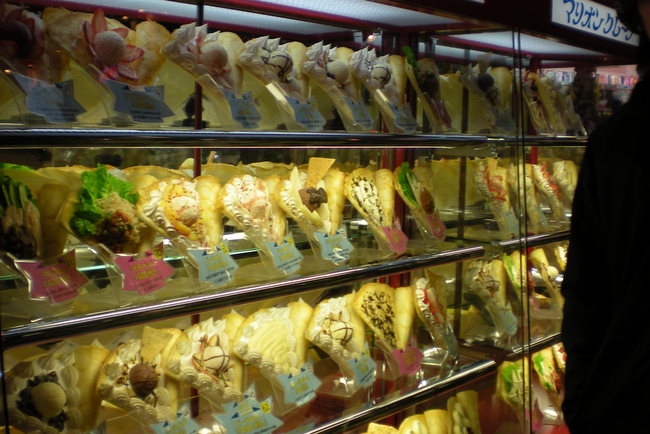 One cannot possibly go to Harajuku without trying the famous Japanese crepes. 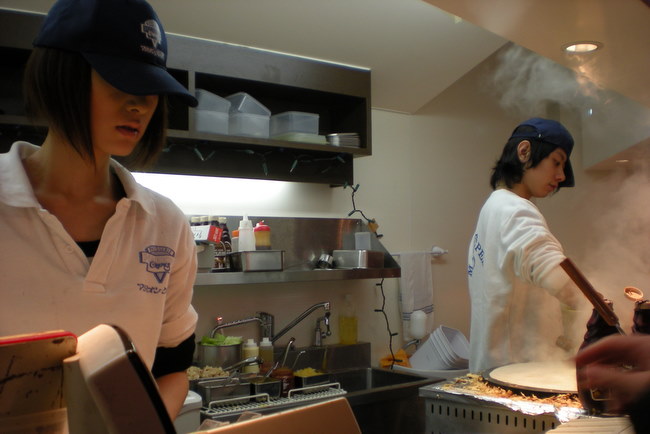 Even the crepe making girl had a fabulous haircut – that was when I decided that I absolutely must get my hair done in a hair salon in Harajuku. And I did. But this is not a hair blog! Suffice to say it was an amazing haircut. 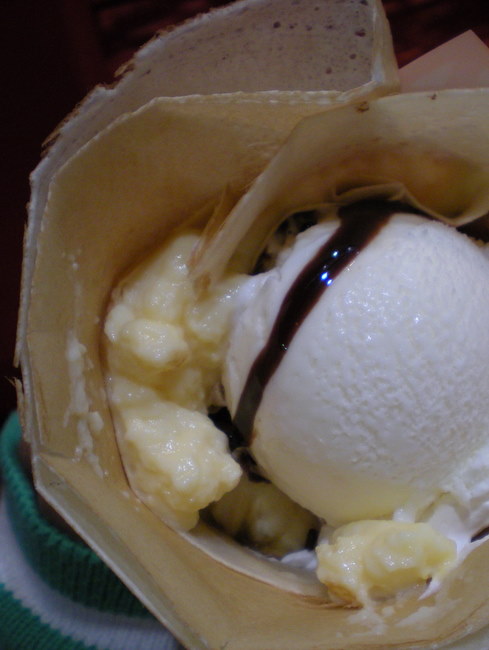 Because I am slightly boring, I settled for custard, banana and ice cream. It was good. But believe it or not, it wasn’t actually better than Harajuku Crepe in Melbourne Central. I was slightly disappointed. 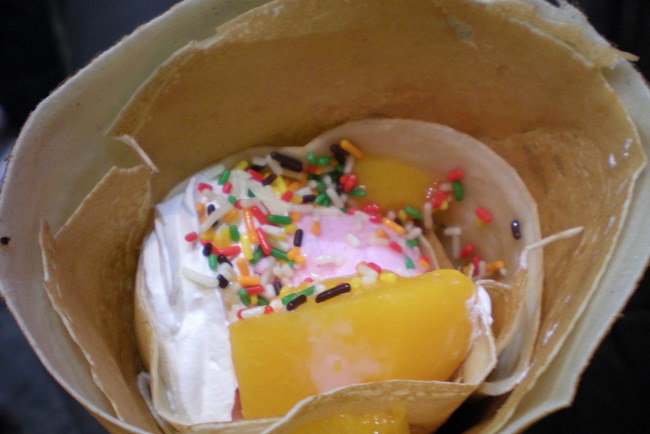 Josh ordered this peach and strawberry ice cream crepe – because it was fruity and colourful. Did I mention my husband is a bit of a fruit loop? 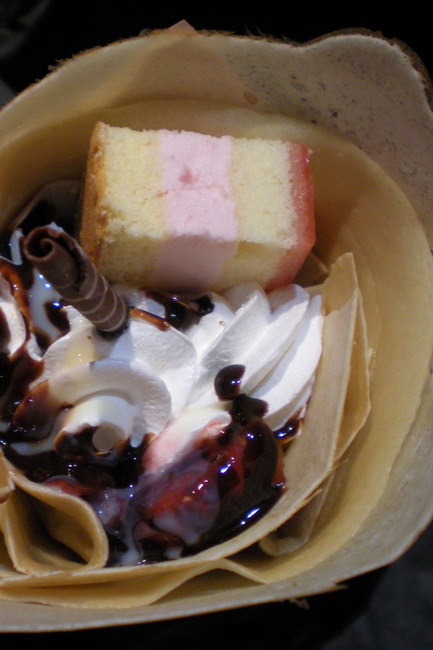 My friend, Sayaka, who I went to high school with and happened to be in town had ordered strawberry cheesecake, strawberry sauce and whipped cream crepe. I think hers was the best. 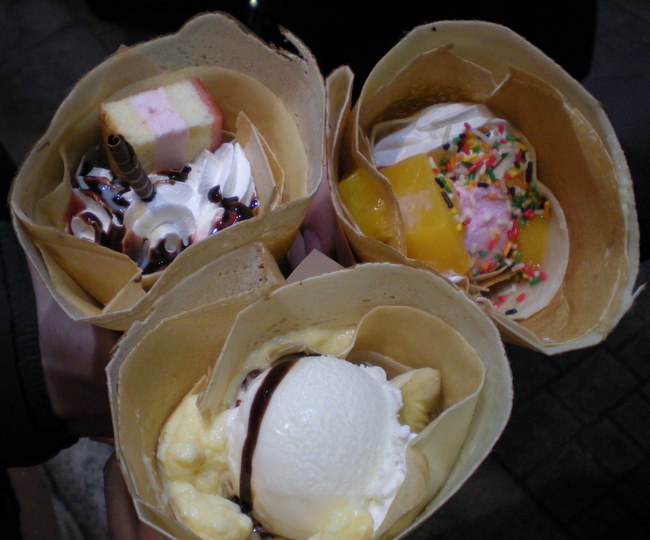 Stay tuned for the next installment of Food, Love & Japan where we sampled the ramen!